Reports are out claiming that Barcelona fear they’re about to lose Spain U17 goalkeeper Inaki Pena to Manchester United. 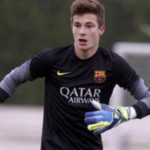 Sport claims that Barca have spent recent months in negotiations with Pena about a long-term contract, but the teen has so far refused to commit.

Pena’s agent, Andy Bara, is also in talks with United, which are offering a far superior deal for the teen to move to Manchester this summer.

It’s suggested United’s offer is worth FIVE TIMES what is on the table from Barca.

Barca hope to convince Pena to stay by assuring him he will be part of the club’s B squad next season.