Reports are out claiming that Manchester United are closing in on the signing of Fernando Llorente. 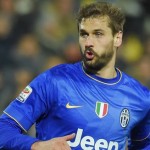 According to the Daily Mirror, the Juventus striker has been revealed as Louis van Gaal’s ‘secret’ signing and could join the Red Devils as early as this weekend.

Negotiations with Paris Saint-Germain over Angel Di Maria are rumbling on and if that proposed deal is finalised, United will make a strong play for Spaniard Llorente, who was recently linked with Liverpool.

The 30-year-old has now emerged as a key transfer target for the Old Trafford outfit who recently lost Robin van Persie to Fenerbahce.

This week, United boss van Gaal revealed that the club has a secret target that the press has not yet written about, which is now believed to be Llorente. We Showed Man Utd What Leicester City Can Do! – Liam Moore