It has been reported that Manchester United are pushing to close a deal for Lazio midfielder Lucas Biglia. 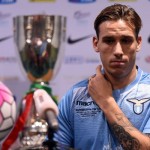 The Sun revealed that United are poised to complete a deal for Argentina international Biglia.

The Red Devils will reportedly tie up a £17.5m move for Biglia with Louis van Gaal desperate to have him in his squad before next week’s Champions League play-off clash with Club Brugge.

Lazio president Claudio Lotito, however, is a notoriously stubborn negotiator and is reluctant to lose their star man.

Biglia has only just been given the Lazio captaincy but he admitted last week that his future at the Italian club is in doubt.

“Will I definitely stay now that I have the armband? I don’t know,” he said.