It has been reported that Manchester United are on the verge of signing Josh Doughty from Real Salt Lake. 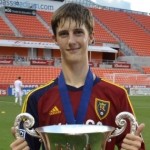 The Canada U18 international is believed to have undertaken a medical with the Red Devils ahead of a youth transfer to the Premier League club.

Canadian-born and US-raised by English parents, Doughty was a revelation for RSL’s U16 team in 2013/14 with 10 goals and more recently starred for the Utah club’s progression to the final of MLS’ top youth championships, the Generation adidas Cup.

Reports suggest that Doughty, who has been involved in Canada’s U16 and U18 teams, will sign a youth contract with United.