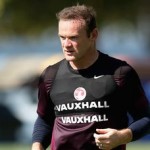 Neville told BBC Sport: “I just think it is a witch-hunt we don’t need.

“Everything has been going so well with the team’s preparation that people are looking for a negative now. But there isn’t a negative with Wayne.”

During England’s preparations for the World Cup, Rooney and Neville’s former United team-mate Scholes suggested the forward may be past his peak.

“There is a side of the English mentality to say ‘let’s look for a scapegoat and somebody to criticise’,” said Neville. “But Wayne is our best player and that’s a fact.”