It has been reported that Manchester United are confident they can beat Chelsea for Cristiano Ronaldo should he become available from Real Madrid. 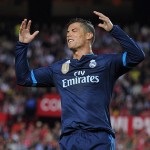 The Sun claims that United are not worried, even though Roman Abramovich has made Ronaldo his top transfer target for next summer.

United are convinced an emotional return to Old Trafford would sway any move in their favour for the Portuguese superstar.

Ronaldo previously left the club for the Spanish giants in 2009 for what was then a world record fee of £80m.

The back-to-back Ballon d’Or winner recently became Real Madrid’s all-time leading goalscorer but has continually hinted at a move away from the Bernabeu in the future.