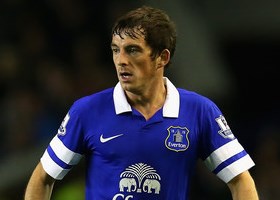 It has been reported that Manchester United are confident of prising Leighton Baines away from Everton.

The Daily Star claims that the Premier League champions have twice failed to sign the England international left-back in the last 18 months, but boss David Moyes is finally confident of luring Baines to Old Trafford in a £20m deal.

Baines is seen as the ideal replacement for Patrice Evra, who is poised to leave United in the summer and return to France.