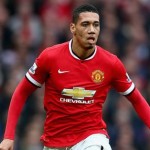 Reports are out claiming that Manchester United defender Chris Smalling is pleased with his current form.

Smalling’s good form has offered encouragement to those who believe the 25-year-old may yet prove to be a long-term successor to Rio Ferdinand.

“I’ve been able to clock up a run of games in the past few months,” he said. “The manager has shown a lot of faith in me and I’ve been able to stay fit. It’ s nice to get a good run, it helps you become more confident and to put your personality on the game.

“Rio was a defender I really admired for the way he put his character and personality onto the pitch. He’s not just your everyday defender. You can see his character in the way he wants to play football. That’s something young players can pick up on.

“When I joined it was a case of playing with him for a good few years and picking up a lot of points. Eventually when he did move on I felt I was ready and it was an opportunity for me to show myself.

“When you have the shirt, everyone else is fighting it out and trying to push you out of the way. When that time comes you need to make sure you’re in a good run of form so the manager feels you are the one who should step in.”