It has been reported that Manchester United defender Jonny Evans has been impressed by his new defensive teammates. 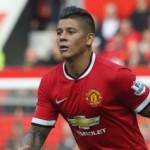 Marcos Rojo’s quietly impressive debut and the promise shown by Luke Shaw in pre-season and in training makes Evans believe the strengthening of the Reds’ squad as a whole is equally as significant as the big-name captures.

“I watched Marcos at the World Cup and thought he was excellent for Argentina whether he played at left-back or left wing-back, and he can play centre-back too. I had the chance to work with Luke in pre-season and there is no doubt he is going to be the best left-back in the world.”