It has been reported that Paddy McNair was over the moon after being called up to Northern Ireland’s senior squad this week. 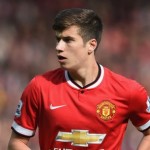 The 19-year old Manchester United defender was included in Michael O’Neill’s roster for the upcoming Euro2016 qualifier with Romania and admitted it was a massive thrill to be on the verge of a possible international debut.

“When I was growing up, I always aimed to play for my country,” the centre-back, who has recently forced his way into Louis van Gaal’s plans, told United’s official website.

“Obviously, as I’ve been playing for United, one of the biggest clubs in the world, I did hope I would receive the call.

“I’m really happy to get called up. I could have been involved last month for the Faroe Islands and Greece games so it’s great I’ve been recalled to join the squad for Romania.

“I want to keep working hard and try to play as many games as I can for United.

“Hopefully, I can break into the Northern Ireland team when I go. I do know a few of the lads – Corry Evans and Luke McCullough from United, of course. I know some others from the Under-21s so I am looking forward to it.” Evra : Rooney Wants To Be A Killer