It has been revealed that Manchester United defender Phil Jones has been ruled out of England’s friendly in Germany due to injury. 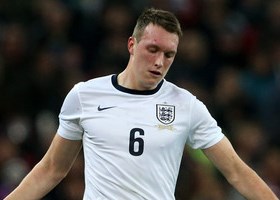 The 21 year old defender came off in the second half of the 2-0 defeat to Chile on Friday with a groin problem and he has now been sent back to Manchester United.

A statement from the FA read: “Phil Jones has been ruled out of England’s final match of 2013 against Germany on Tuesday evening.

“The Manchester United defender picked up his injury during England’s defeat to Chile on Friday evening, and following a scan today (Saturday) he has returned to his club.”