It has been reported that Manchester United defender Tyler Blackett has revealed how former teammate Rio Ferdinand would coach him one-on-one. 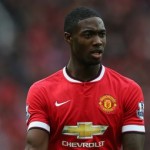 Ferdinand, now with Queens Park Rangers, would take Blackett to one side to offer pointers, while the confidence manager Louis van Gaal has given him is clear to see.

“I still speak with Rio now and he texts me after games,” Blackett told the Mail on Sunday.

“He would take me for training sessions on my own where he would give me tips.