Reports are out claiming that Manchester United have reportedly demanded Karim Benzema from Real Madrid. 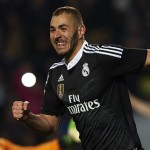 The Red Devils still fear losing star goalkeeper David De Gea to the Spanish giants so have requested that French international Benzema be included in any potential deal according to The Telegraph.

Multiple reports suggest that Real will offer around £22million for Spain international De Gea but that proposed fee could be drastically reduced if Benzema is thrown in.

Louis van Gaal is determined to land a top quality striker this summer and has already been heavily linked with Napoli’s Gonzalo Higuain and Atletico Madrid’s Mario Mandzukic.