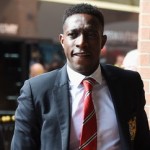 It has been reported that Manchester United have slapped a hefty loan fee on Danny Welbeck’s head.

The Daily Star Sunday reported that United want £3.5 million for Welbeck – if he leaves on loan for the season.

Clubs chasing the England striker, like Tottenham, Arsenal, Everton, Sunderland and Hull, would have to pay his wages in addition to handing United a £1 million loan fee.

To sign Welbeck, 23, on a permanent basis would cost £15 million.