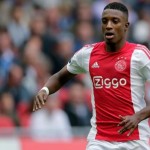 Reports are out claiming that Manchester United have launched a bid for Ajax midfielder Riechedly Bazoer.

Le 10 Sport reported that United have made an offer for Bazoer.

The Red Devils have moved for the 19-year-old to beat rivals Arsenal, Chelsea and Manchester City to the Dutch starlet.

Bazoer has scored seven goals in 55 appearances for Ajax after making his debut in 2013 and now looks like he will be making a move this summer.