Reports are out claiming that Manchester United are exploring the prospect of prising Kevin Strootman away from AS Roma. 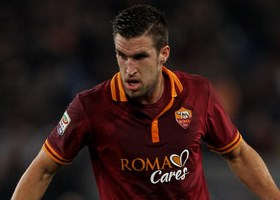 The Daily Mail reported that the Dutch international midfielder was a target for David Moyes while he was playing for PSV Eindhoven and Moyes was Everton manager.

The Scot was keen to take him to Old Trafford, too, this summer ahead of William Carvalho of Sporting Lisbon.

Strootman is out of Holland’s World Cup campaign after damaging knee ligaments but Louis van Gaal is still keen on recruiting the 24-year-old to his new squad.

Roma would want a considerable profit on the £15m they paid last year but talks are ongoing between his representatives and interested parties.