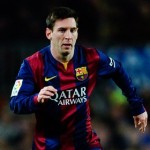 The Barcelona superstarstar has been linked with Chelsea this season and Di Maria believes his Argentina teammate would be happy to play for former Real Madrid coach Mourinho.

“I do not think Leo wants to leave the club, mainly,” Di Maria told fifa.com.

“It is very difficult to leave a club where he gave everything, where he grew up.

“But as to the question, I do not think he would have any problems with Mourinho (smiles).” Rooney : Van Persie Will Win The Player Of The Year Award!