Reports are out claiming that Manchester United manager Louis van Gaal felt his side gave away the FA Cup quarter-final to Arsenal. 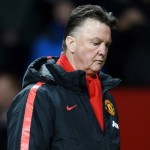 The Red Devils lost 2-1 to the Gunners at Old Trafford on Monday night courtesy of goals from Nacho Monreal and Danny Welbeck either side of Wayne Rooney’s equalizer.

The manner of Welbeck’s eventual winner, which came via a poor backpass from Antonio Valencia, was not lost on van Gaal who felt it was a missed opportunity for his United side while excusing the Ecuadorian for his mishap.

“It is very disappointing when you give the victory. You don’t lose from your opponent, you have lost from yourself,” he said.

“When you see the second goal, it was nothing. We gave it away, so the man (Valencia) who was doing that was the best man of my team and that is also for him so disappointing. He did it not with purpose. It happens.”