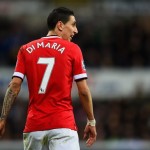 Reports are out claiming that Manchester United want to hear from PSG over their interest in Angel di Maria.

It is said that the Premier League giants plan to sell the Argentine at the end of the season, with the former Real Madrid winger failing to settle in the Northwest.

Fichajes.com says United won’t sell for anything below £59.7m – the price they paid for him over the summer from Real Madrid – and suggest only PSG can afford his services.

The Ligue 1 giants failed to land the winger before his eventual move to the Red Devils.