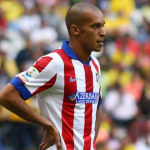 Reports are out claiming that Manchester United have received encouragement in their pursuit of Atletico Madrid defender Joao Miranda.

The Daily Star says United have been given the green light to sign Miranda from Atletico Madrid.

The 30-year-old centre-back has been told he can leave the Spanish champions in January for a cut price fee.

The Brazil international joined Madrid in 2011 from Sao Paulo and has a £30m buyout clause.

However reports in Spain are saying he will be allowed to leave for £20m.

Manchester United on the verge of signing Michael Owen