It has been reported that Valencia midfielder Ever Banega is attracting big Premier League interest. 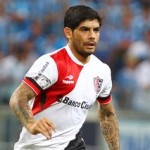 Manchester United, Everton and Sunderland have all been linked with the Argentine international in the Spanish press.

Banega’s, UK representative, Jonathan Hope, has confirmed a number of Premier League clubs have expressed an interest in signing the South American.

“We have had immense interest in the Argentinian international,” Hope told Sky Sports.

“I can confirm I am personally speaking to two top clubs who have expressed real intent in capturing the player.

“He is a top quality player and he is still only 25 and I believe he would be a major success in the Premier League.” Rafael Da Silva Battling To Be Fit For Arsenal Clash