Reports are out claiming that Lazio midfielder Lucas Biglia has declared he wants to play in England. 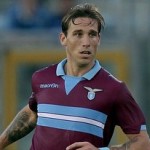 The Argentine international has revealed he came close to joining Real Madrid over the summer.

However, yesterday Biglia confessed an ambition to play in the Premier League: “I would love to play in England.”

He continued: . “London? It’s a very beautiful city, I’ve visited. I would love to play in a major championship like the Premier League.”

Biglia has been linked with Everton and Manchester United in the past, where both David Moyes and Sir Alex Ferguson were big admirers.

A move to Everton could still be on for Biglia, with manager Roberto Martinez also a big fan of the midfielder.