It has been reported that Belgian football experts expect Club Brugge to hold onto young striker Obbi Oulare this season. 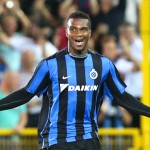 The centre-forward has been watched by the likes of United, Everton and Borussia Dortmund this year.

However, Timothy Collard, of Voetbalkrank, says Oulare will still be with Club Brugge when the summer market shuts in a fortnight’s time.

“I don’t think – no one in Belgium does – that he will leave Brugge this summer,” said Collard.

“Tom De Sutter has already signed a contract with Bursaspor and after the home game against United he will move to Turkey. So Obbi will get more chances and he can become more influential on the pitch than last season.

“He needs as least one top, top, top year in Belgium before he’s able to make a big move.”