Reports are out claiming that Manchester United are expected to announce a deal for Borussia Dortmund defender Mats Hummels later this week. 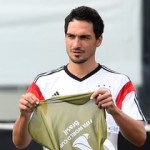 Barcelona’s Sport newspaper claims that an agreement has been struck between United and Dortmund over a €20 million fee. Hummels’ move could be confirmed sometime this week.

Adding to the speculation is Matthais Ginter’s imminent move from SC Freiburg to BVB as Hummels’ replacement.

Barcelona were also keen, but were informed last week that the defender wanted to join Van Gaal at Old Trafford.