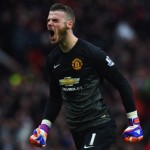 Reports are out claiming that Manchester United believe they can retain David De Gea by offering an improved contract.

The 24-year old Spanish international goalkeeper is a strong target for Real Madrid who are looking to make a move for his services in the summer.

However, recent reports suggest that United are confident of keeping him at Old Trafford with a £200,000-a-week extension.

Former Atletico Madrid ace De Gea is under contract until next summer but the Red Devils are eager to ward off interest from outside parties by offering him a lucrative amount of money to stay put.