It has been reported that Manchester United are exploring the prospect of buying back Cristiano Ronaldo from Real Madrid. 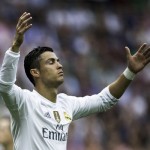 United are lining up a world record bid for Ronaldo, according to reports in Spain.

Fichajes says the Red Devils will present Real Madrid with a £92.5m offer for their former star.

Ronaldo, 30, is also a target of French giants Paris Saint-Germain, who have been keen on the forward for some time.

The Portugal captain has scored eight goals in seven games this season.