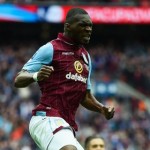 It has been reported that Manchester United are eyeing Aston Villa centre-forward Christian Benteke.

United have their striker department to address in the summer with the futures of Robin van Persie and on-loan Radamel Falcao in serious doubt.

Van Gaal said of the Villa target man’s performance against United: “Benteke won all his duels.”

The £25m-rated Belgium striker, 24, is in hot form and has two years remaining on his contract.

But Villa boss Tim Sherwood admitted last Friday he could be sold.