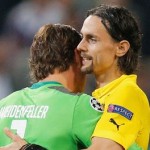 United will instead turn their attentions to Subotic, who is a name that has cropped up in the past for them.

United also have Aston Villa’s Ron Vlaar on their wish list, although they are thought to be readying a fresh deal to keep him at Villa Park.

It remains to be seen whether United will strengthen their defence in January.