It has been reported that Sevilla ace Ever Banega is a Bosman target for Manchester United. 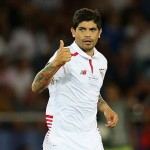 The Sun says United are interested in bringing the talented midfielder to Old Trafford in January.

The Red Devils have frequently been linked with Banega with Louis van Gaal finally prepared to make a formal approach.

The 27-year-old’s contract expires in June and has yet to agree an extension with Sevilla.

The Argentine, who featured in the 2015 Copa America, currently earns £71,000-per-week but could see his wage packet increase at Old Trafford.