It has been reported that Tottenham boss Mauricio Pochettino is on the managerial radar at Manchester United. 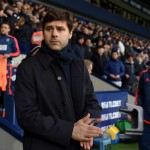 The highly-rated Argentinian impressed the United ­hierarchy with his calmness, dignity and coaching ability even before he joined Spurs 18 months ago.

And the way he has guided the Londoners into Premier League title contention with a minimum of fuss has only added to his reputation inside Old Trafford with Louis van Gaal’s future far from assured. Man Utd Goalkeeper Anders Lindegaard Frustrated After Back To Back Lost