Reports are out claiming that Manchester United are eyeing a sensational move for Real Madrid midfield ace James Rodriguez. 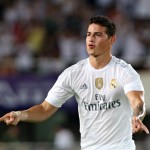 According to AS, the Colombia international is seeking a new pay-rise at Real as he demands parity with the likes of Sergio Ramos and Gareth Bale.

United are monitoring developments and have the spending power to tempt James away from Madrid.

Louis van Gaal, the United manager, has stated he wants to add “more pace and creativity” to his squad – and James fits the bill.

Much will depend on Real’s willingness to consider entering new contract talks with James’ agent, Jorge Mendes.