It has been reported that Manchester United are watching Sunderland goalkeeper Jordan Pickford’s progress on-loan at Preston North End. 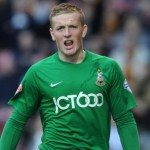 The Daily Star Sunday claims that United’s scouts have been keeping an eye on Pickford’s progress during his loan spell at Preston.

The Black Cats keeper, 21, has established himself in the England Under-21s side and is highly rated at the Stadium of Light.

Johnstone, though, is believed to be frustrated at his lack of opportunities and Valdes is out of favour with boss Louis van Gaal.