Reports are out claiming that Manchester United are being linked with Wolfsburg left-back Ricardo Rodriguez. 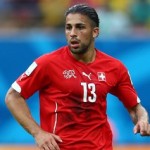 The Daily Mail reported that United are reported to have made an offer for Rodriguez but the club has yet to confirm the interest.

With Juventus keen on Patrice Evra, United will need another option as competition for Luke Shaw but Wolfsburg want more than £15million for Rodriguez who has also been watched by Liverpool and Tottenham.

He impressed for Switzerland at the World Cup on the back of a decent Bundesliga season.