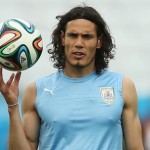 It has been reported that Manchester United fear missing out on PSG striker Edinson Cavani.

The Mail on Sunday claims that the situation regarding the Uruguay international remains in the balance.

United have trailed Cavani for a long time, even before Van Gaal arrived, but the Uruguayan international keeps sending out mixed messages about his future.

That is perhaps because Chelsea’s interest in the striker re-surfaced last week even though Jose Mourinho has said he has completed transfer business.