Reports are out claiming that Napoli defender Kalidou Koulibaly is attracting interest from Europe’s biggest clubs. 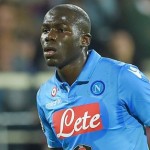 The 23 year old French defender has been a revelation this Serie A season, having only arrived in the summer from Racing Genk.

Napoli splashed out €8 million to sign Koulibaly three months ago and now rate him at least double that figure.

“I’ve learned a lot since I’ve come here, I garnered experience in this team. I did not expect to be first-choice so quickly.”