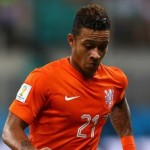 Reports are out claiming that Inter Milan have made contact with PSV Eindhoven for winger Memphis Depay.

Gazzetta dello Sport reported that Inter have joined the battle for the Dutch World Cup star and have made informal contact with PSV about the player’s situation.

Last week, Depay admitted he was aware of interest from “Manchester United, Manchester City and Tottenham”.

Inter are also testing the ground, having followed Depay’s progress since his time with PSV Eindhoven B.