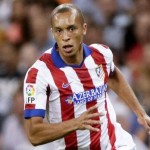 The Mirror claims that Atletico are willing to sell Brazilian defender Miranda in January – and that has put Manchester City on red alert.

Miranda, 30, has been a target for Manchester United, Chelsea and Barcelona but City are watching developments after being sounded out.

City have already been heavily linked with Atletico striker Mario Mandzukic and it appears that the Spanish club would sell Miranda for around £20m.

Eto’o : Balotelli Must Listen To Advice In Manchester City!