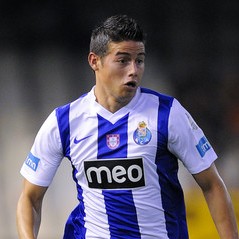 Interesting transfer news are out claiming that Real Madrid are ready to challenge Manchester United for Porto star James Rodriguez.

With Nani stalling on new contract talks, United manager Sir Alex Ferguson is expected to cash in on the Portuguese and replace him with Rodriguez.

However, Sportmediaset says Real boss Jose Mourinho, now in full control of their transfer policy, is also keen on the Colombian.

Rodriguez has admitted he could be on the move in 2013.