It has been reported that Real Madrid are ready to challenge Manchester United for Benfica defender Victor Lindelof. 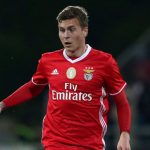 Lisbon sources insist United already have an agreement with Benfica over a deal for the Swede.

However, Real are also keen, where coach Zinedine Zidane is driving the move.

Zidane sees Lindelof as an option to replace Pepe, who comes off contract at the end of this season. The Benfica man’s versatility is also an attraction.

Real are now ready to test the strength of United’s agreement with Benfica ahead of the summer market.

Karanka : Benzema Has The Support Of Real Madrid