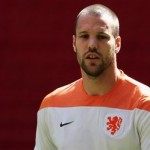 Koeman has admitted that he could move for the Dutch international as a replacement for unsettled Dejan Lovren.

“Ron would definitely be an option,” Koeman told Fox Sports.

“But I think he won’t be cheap right now. Let’s just wait and see.”

Vlaar is a target for AS Roma and has been linked with Manchester United.