Reports are out claiming that Manchester United boss Louis van Gaal is in the market for a new striker signing – and is willing to spend big to land him. 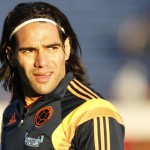 AS Monaco centre-forward Radamel Falcao is set to join Real Madrid after agreeing personal terms – but not before he fielded a massive offer from United.

El Mundo Deportivo says United, on orders from Van Gaal, tabled a bumper contract offer to the Colombian last month. While terms were not disclosed, the proposal was big enough for Falcao to hesitate before continuing his negotiations with Real.

Van Gaal’s move does suggest he is in the market for a new striker signing this summer – and willing to pay big for the right name.