Reports are out claiming that Arsenal legend Thierry Henry has defended the record of Manchester United boss Louis van Gaal. 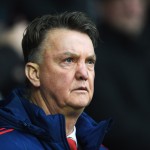 Henry believes the faith the Dutchman has shown in youngsters has paid off and proven talent is coming through the ranks at Old Trafford.

The former French international star told The Sun: “If Louis van Gaal does not survive beyond the season at Manchester United you have to admire his bravery in putting so much faith in the club’s youngsters.

“LVG has given a first-team debut to 14 members of the club’s academy during his two years at Old Trafford and unearthed some real diamonds.

“Kids like Marcus Rashford, Jesse Lingard, Guillermo Varela and Cameron Borthwick-Jackson have all made the most of the opportunity to showcase their talents.

“If LVG leaves this summer and a new manager takes over, those youngsters might not get the same chances next season.

“But they have already shown they are good enough to play at the highest level and United will not want to squander all the time and effort their academy has spent nurturing this talent.”

Video: Interview with Nacho Monreal & Is He a Good Buy?