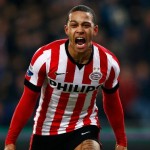 De Telegraaf claims that the number of serious suitors for the Dutchman is falling as the summer market draws near.

Along with United, Tottenham, Liverpool, Chelsea and Arsenal were all actively scouting Depay this season.

However, in recent weeks, Chelsea, Tottenham and Arsenal have ended their interest and are now focusing on other targets.

Liverpool remain in the hunt, but are rated as outsiders against United, where the presence of Louis van Gaal will have a big influence on Depay’s thinking.