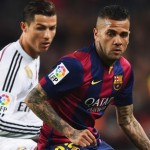 Reports are out claiming that Manchester United are regarded as favourites for Barcelona fullback Dani Alves.

The Brazil international is off contract in June and has been frustrated by the lack of movement from Barca over a new deal.

He is now resigned to leaving Barca at season’s end and Sport says his agent is in contact with seven clubs about pre-contract offers.

However, United are rated as favourites, with manager Louis van Gaal pushing hard to bring Alves to Old Trafford next season.