Reports are out claiming that Manchester United are ready to pounce for Real Madrid’s wantaway winger Angel di Maria. 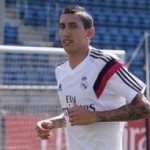 The Mirror reported that PSG have withdrawn from the bidding for Di Maria because they cannot fit the Real Madrid star under their Financial Fair Play spending cap.

The French champions have already blown their £50million limit on buying defender David Luiz from Chelsea and president Nasser Al-Khelaifi admits the Di Maria deal is “too expensive”.

However, the Old Trafford giants must still agree a fee with Real – they are demanding £48m for the Argentina World Cup winger – and also convince Di Maria to join them, as his preferred choice was PSG.

Wayne Rooney Set To Return To Action Inside Two Weeks