It has been reported that Manchester United chiefs are concerned David de Gea has been unsettled by interest from Real Madrid. 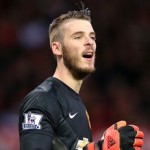 The Mirror claims that United fear that Real Madrid’s growing interest in David de Gea is behind the Spanish keeper’s reluctance to sign a new contract.

The 23 year old has less than two years remaining on the deal he signed when joining United in an £18million move from Atletico Madrid in the summer of 2011.

And the Reds have been desperately trying to seal a new long-term agreement to keep the former Atletico Madrid star out of the clutches of the European champions.

Madrid are looking for a successor for Iker Casillas.

And with De Gea set to replace Casillas as Spain’s No.1, the Bernabeu giants have set their sights on raiding Old Trafford.