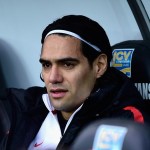 It has been reported that AS Monaco striker Radamel Falcao is tightlipped on a move to Chelsea.

After Manchester United decided against signing him permanently, Falcao is being linked with a switch to Chelsea.

However, he’s refused to give anything away when asked about his future, insisting he is focused on Colombia’s bid for glory at the Copa America.

He told AS: “Is my future at Monaco? Right now I’m thinking only about the Copa, there has been a lot of talk but I am relaxed about it. My agent is the one who takes care of all of that.” Andreas Pereira Scores Twice For Man Utd Against Tottenham U21