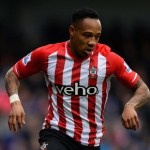 Reports are out claiming that Manchester United are preparing a bid for Southampton fullback Nathaniel Clyne.

The Mirror says Clyne has refused to pen a new contract on the south coast and his current deal at St Mary’s expires in July 2016.

The ambitious youngster is keen on a move to Old Trafford to follow in the footsteps of Luke Shaw.

United chief Louis van Gaal is a big admirer of the attacking England full-back and they are now hopeful of landing him.