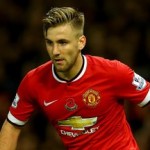 It has been reported that Manchester United fullback Luke Shaw was amazed by the intensity of the derby at Manchester City.

City edged United on the day.

The England international revealed during an Instagram takeover of Manchester United official page on the social media site that he was nervous before the clash.

He said: “It was crazy! When I’d watched the derbies at home you didn’t feel the atmosphere like you do when you play in it. Obviously there were nerves but good nerves – I felt good. And we were really unlucky to lose the game.”