It has been reported that Manchester United fullback Luke Shaw is looking forward to the derby this weekend. 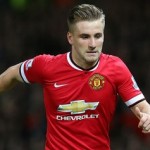 Arguably the biggest test for Shaw and his United team-mates will come on Sunday when they travel to the Etihad Stadium to take on bitter rivals Manchester City.

“It’s pretty obvious what this match means to the fans and the club. I don’t think I need to be told about it and the other (new signings) will be aware too,” the Surrey-born teenager said.

“I’ve watched it for the past years and I’ve seen how much it means to everyone.

“It’s one of the biggest occasions in football after the World Cups and Champions League finals.

“It’s a massive occasion for everyone involved in it. We need to come out firing on Sunday.”